We meet every Friday, except when we don’t, at 9:00 am outside the shop and then take off into the known. In addition, the most intrepid members  meet on Wednesdays, and now it seems on Monday’s too ;-0

The cycling group was formed a few years ago by Martin Dickinson and Bill Ellis and Baldric owes its wonderful acronym to Bill Ellis.

The group welcomes anybody (as you can see below) to join in, even those who rely on electric engine assistance 😉

The weather was lovely and we finished 15.9 miles in just about 90 minutes averaging 11.3 miles per hour.

The route today had some wonderful views and was, from the shop to Naunton Beachamp – Pinvin – Peopleton – Drakes Broughton – loop via Upton Snodsbury – Cowesden – right at T junction – left into Snodsbury – past school – 200m walk across sheep field in John Tarran’s farmyard (where you can see all around for miles) – down the drive, left to Peopleton. Right+left on A4538, Drakes Broughton, Walcot  ford, left at Pershore station, Pinvin again, Throckmorton, Bishampton Stores for cappuccinos and tea.

On the hottest day of the year, eight or nine intrepid riders (see below) rode forth to Inkberrow and beyond. Great to see Martin Dickinson and Don who rode to Inkberrow who then rode back to Bishampton with Don, 11 miles for them.

The Peleton (Rodders power assisted cycle) and the remaining 5 riders continued to Stock Green, Dormston, Kington, Flyford and then back to Bishampton.

Runners and riders: Martin, Faust, Tony , Malcolm, Rodney Don, Dave and Tim K.That’s 8, but Tim was sure he counted 9 before setting off 😉 (Ed: Age gets us all in the end).

An historic day for Baldric wherein Don is promoted to the Baldric A team.

John [who lives opposite Nightingale Farm normally rides 100+ miles a week and it was good to have him join the Baldric team.

‘Statto’ Faust advises that although we started at 9.05am and arrived back at 12.25pm, we were riding for 2hrs 44mins and completed 31.6 miles. That’s an average of 11.5 mph, for those who are interested, which I feel was good going as there were some steepish hills and one very long one approaching Great Comberton.

Big cheer for Don who doesn’t much care for riding up steep +/or long hills, but persevered nonetheless.

We had coffees and tea at the very pleasant Star Inn, Ashton under the hill.

Sadly no-one amongst the party thought to provide photographic evidence of this endeavour.

Only three of us managed today’s run – Derek, me and welcome back Don. We enjoyed a very pleasant ride in decent weather and good company.

Next Wednesday 29th July we’re going to ride the Bredon Hill loop [route #22 attached] having talked about it for months, and possibly years, so join us for all or part if you can. 9am at the shop as usual. Even if you’re not riding with us, if anyone knows of a coffee shop about halfway then do please let me know asap, otherwise riders should pack a snack.

The “A” team went to Worcester where burgers were consumed by all except Rodney.

A short ride today taking in the Reindeer cafe for the required cappuccino with (of course) chocolate sprinkles.

8.3 miles today, “C team” distance, but the weather was great and the ride was enjoyed by all.

Seven riders in total  – see below. 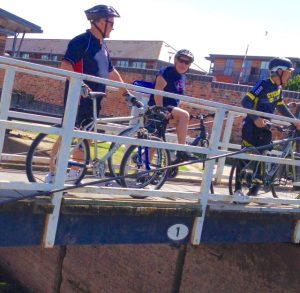 Will the intrepidity ever stop?

It could be one of the longest for Baldric to date but it was certainly the most interesting and would recommend to any other budding traveller.

Star Ship Baldric with Captain T King at the helm and FT Chekov ( Fladbury Tim) as chief navigator, lead their fellow explorers into the wilds of Worcester yesterday clocking up a mighty 37.5 light years in just under 3 hours. Attached photo ‘On The Bridge’

The route on country lanes has been made possible by the recent opening of the footbridge crossing over the A4440 Crookbarrow dual carriage way. It has been placed beside the new railway bridge near Norton Barracks allowing easy cycle access to the new Worcester Parkway station.

The route from Bish;
Pershore – Ford Crossing opposite the Station – Drakes Broughton – Wadborough – through Littleworth- left along Woodberry Lane – under the M5.- In 350 metres keep right down Brockhill lane . sign posted Cycle Route ( Do not go past Norton Barracks) Over the new bridge keep right and you enter the Worcester Cycle Route area. Return the same way.

During the lock-down intrepidity has grown in stature as several new, and very keen, cyclists have joined Baldric and the length of rides has increased to hitherto unheard of distances.

Today’s trip was 19.3 miles and Malcolm describes the weather as very “cracking” whereas I might say wet windy and otherwise foul 😉

Fladbury Tim spotted a detour down a dirt track near Elmley which actually added an extra 1.4 miles and a 100 foot incline. OK for those with good knees but on the other hand it was lovely to see the middle of the village and remember the good times had laughing and drinking at the Queens pub … Mmmm
Coffees in Pershore car park were £2 per head for the real McCoy, great value. Can’t wait for cappuccinos & chocolate sprinkles in the Bishampton shop!

Today’s historic ride was a clear guide to the future of Baldric’s intrepidity in 2020.

The return journey was via Pinvin (originally Penda’s Fen, for those of you who were not aware) on to Throckmorton and thence to Bishampton. In all about 15 miles covered.

The picture below records the Magnificent Seven as they set off back to Bishampton having consumed chocolate sprinkled cappuccinos in the Koffee & Cake cafe.

The weather was glorious with no headwind, for once, and the sun shone upon our helmeted heads.

Last week’s ride welcomed Malcolm who was so taken with the Baldric’s intrepidity that he rode again again today. We have to welcome Peter too, as he rode last week.

Six intrepid riders today – Don, Rodney, Tim, Tony, Bill & Derek. It was a bit nippy and even Bill had foresaken his shorts for trousers!

The drama of the day was when we lost Don as we entered North Piddle. We rode back to find him at the Flyford Garage being attended to by a very nice young man who was a keen cyclist and had a pump. Sadly the puncture could not be fixed and emergency services were duly called. Emergency Services were not too happy and it is probably best not to relate what Don’s wife said when he asked for a pick up. Five then continued the ride through North Piddle, Naunton Beachamp and thence to the village shop for traditional cappuccinos and tea. Don was waiting and paid the bill – hurrah & thank you.

I’m very much behind in reporting the September and October continuing intrepidity of many members of Baldric but just had to immortalise Tim’s trip.

Tim was all alone on this Wednesday, the day after torrential rain hit us all for six.

He took this photo of the ford in Naunton Beauchamp. He is hereby awarded the very highest gong that Baldric can provide. The Rusty Cycle Clip is hereby bestowed. Congratulations Tim 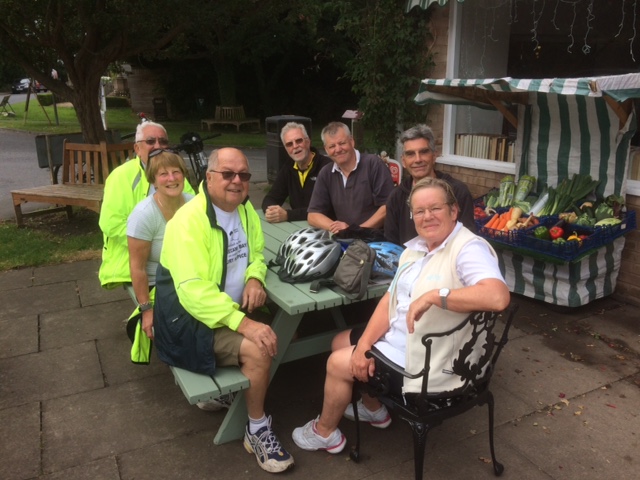 The high point of the day was Martin’s question to Derek “How’s your bottom coming on?”. After a moment, or two, clarification was offered by Martin to the relief of all present. He was referring to the rear end of Derek’s garden (not the other type of rear end). Gratitude for the clarification was expressed by all once they had picked themselves up from the floor.

Also of note was the freshly painted table at which we were all sat. Please note the National Trust green paint supplied by Rodney and enabled by the Baldric village shop maintenance team. “That’s the beauty of Baldric” said Mr H 😉

Today’s ride according to Google maps was 8.8 miles. Tim, Stewart and Tony celebrated the mildly damp experience with a coffee at the Shop.

The absentee Baldricians were shamed into expressing their admiration.

Just three Baldricians today; Tony, Don & Derek enjoyed the lovely weather and we had a good old chat too.

Today’s ride was 12.1 miles. Up to Rous Lench (the hill is getting easier), thence left to Radford, down to Flyford Flavel, on to the A422 turning left into North Piddle and doing the complete circuit. Thence up to the Abberton turning right towards Bishampton and the Dolphin for tea and cake!

In what was the wettest test of intrepidity this year, three of our finest baldricians set off into the stair rods of damp despair.
I think Tony’s face says it all whilst Tim & Gordon manage a broad smile.
Congratulations to the three of you & the ancient order of the RCC (Rusty Cycle Clip) is hereby bestowed.

A super ride this morning and a good bit faster paced too! Ten tanned legs were on show.

Tony was a solo intrepid cyclist and receives a well deserved platinum cycle clip award. Bish Bosh Bash activities claimed Tim & the rest of us were on holiday or still in bed.

Just three intrepids burned rubber today and drama there was!

Tim, Don and Tony started an ambitious 11.4 mile ride but unfortunately the team suffered its third puncture of the year just 3 miles into the ride.

Golden cycle clips have been awarded to Tim & Tony who set off this day in light rain after a tumultuous downpour!

7.3 miles were logged and a new route was investigated road closures an’ all.

Those of us who did not turn up are shamed into deferential admiration of their joint and continuing intrepidity.

Silver cycle clips were awarded to Tim & Tony who experienced English rain at its best! 9.8 miles were covered.

Tony suffered a puncture and had to walk 0.75 miles to get home.

We lesser Baldricians were hiding in bed clutching our hot water bottles.

Three Baldrics (again) this morning Tony, Rodney (the brownest one, by far) and Derek set off for the Naunton Beauchamp / North Piddle circuit.

A delightful trip of just 8.2 miles in 52 minutes. Thence to the Village Shop for the inevitable cappuccino and topical discussion of current affairs.

Just three intrepid cyclists this morning enjoyed a trip of 11 miles, in just over one hour.

Bill (founder, philosopher and medical support), Tony (probably the fittest of us) and myself (Derek (the unfittest (Ed: is that a word?)).

A memorable day with most of the team + an honoured guest making a sterling trip through Rous Lench, Radford, Flyford Flavell, North Piddle, Naunton Beauchamp and back to the shop. Those who cut short the trip at Flyford Flavell returned to fund the well deserved cappuccinos. Rodney had a dramatic puncture and was duly left at North Piddle but retrieved by Janice and made it back in time for his cappuccino.

Our longest trip so far this year leading some to think of planning a circuit of the Brecon hills later this year. Eeek!

I discovered the lovely lanes and countryside around & through North Piddle.

Five intrepid cyclists were properly soaked by rain, sleet and hail. They were buffeted by high winds and yet made it back to the Village Shop for a well deserved cappuccino.

Congratulations are due to Tony, Tim, Rodney, Bill and Derek for braving such inclement weather.

Sadly no photographic evidence exists to support such intrepidity.